We were really really lucky to have Sarah Cameron Sunde, of Oslo Elsewhere and New George, onboard as our translator for Verkeleg/Reality (the Norwegian play in the Nordic Spirit festival).

Sarah is awesome! Click here for more about her.

She also sent us her thoughts on the recent translation process for Gyrid Axe Øvsteng's Verkeleg:

While I was translating REALITY, I made sure to reach out to Gyrid to find out what was most important to her, since sometimes a translator has to choose between meaning and poetry. Gyrid responded that the rhythm was of utmost importance. So I worked from a rhythmic perspective, trying to move her voice into contemporary American English, getting as close as I could with meaning and word choices.

Once I had a draft that I felt solid enough with, I sent it over to Gyrid to read. She responded with several comments and thoughts, which was so useful for completing my next draft. Then, in early September, I was lucky enough to be in Norway and we were able to meet in person. We hashed through several of the challenging parts of the text together. We were able to come up with some new solutions, and I walked away with a better sense of words to search for in the next phase of the translation. I was so happy to have that opportunity to work through a few of those tricky bits together because nuances are what differentiate a good translation from a great translation, and there is always much to be found in the collaboration between playwright and translator.

I came back to the States and completed my final draft that was read in Chicago. A translation always needs time and space in-between drafts so that a translator can approach it with fresh eyes. I am grateful to have had time in-between drafts, the support of Akvavit in Chicago, and a fine collaboration with Gyrid.

Posted by Bergen at 2:46 PM No comments:

Nordic Spirit - postmortem at a glance

So Nordic Spirit 2010 is officially over. *sigh of relief* This festival was the first Akvavit Theatre event, and it went as well as we could have hoped. Over the entire weekend, we had 250 people who generously gave their time and feedback, and that's not even including the actors, directors, and volunteers.

We'll be compiling our notes as well as the recordings of the post-show talk-backs. Anyone want to volunteer to transcribe the audio tapes? Tack! We're also keeping an eye out for other feedback about the event. Brendan McCall of Ensemble Free Theater Norway was gracious enough to moderate our post-show discussion for Verkeleg/Reality and recently posted his thoughts here.

Verkeleg is even being considered for other American theatre festivals after its introduction during Nordic Spirit, which, obviously, is very exciting for us. This is a big part of why we formed Akvavit - to get new Nordic plays in front of American audiences.

I forget sometimes, that not everyone has the same Nordic knowledge base as I do. The actors I worked with in the Danish and Icelandic plays mentioned that they knew very little to nothing about Nordic theatre. After the readings, I heard the following:

- Now I'm going to do research...
- I want to know more about Nordic theatre!
- Someone needs to do this play!
- I want to hear about what you're doing next.

Woohoo! So yeah, it feels good. Not only are we working to increase exposure of new plays and playwrights, but we're shining a spotlight on Nordic theatre. We're saying, "Hey Chicago, come take a look at this!" After this weekend, it sounds like Chicago may be interested in what we have to offer. I'm holding my thumbs...

Thanks again to all of the actors, directors, students, playwrights, translators, and scholars who made this festival happen. And a big thank you to everyone who attended! Festival photos and discussion notes are being compiled shortly. Stay tuned!
Posted by Bergen at 1:26 PM No comments:

Nordic Spirit - how to get to North Park University this weekend. 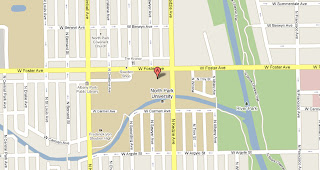 The theatre at North Park (also called the Lecture Hall Auditorium on campus maps) is located directly behind Old Main at 3225 W. Foster. We'll have signage on campus as well.

You can take the 92 (Foster) bus to Kedzie and you're right there. There is also ample free parking on either Spaulding heading north or Sawyer heading south.
Posted by Bergen at 1:23 PM No comments: